Complete submission instructions are on the mentorship page of the website.

The submission window for both mentorships is May 5-26.
For questions, contact SCBWI-MI mentorship coordinator Ann Finkelstein.

Today we have an interview with nonfiction PB mentor, Patricia Newman. Patricia’s award-
winning books show kids how their actions can ripple around the world. She is the author of
Robert F. Sibert Honor Book Sea Otter Heroes: The Predators That Saved an Ecosystem; as well
as NSTA Outstanding Science Trade Book Eavesdropping on Elephants: How Listening Helps
Conservation;  Zoo Scientists to the Rescue, a Bank Street College of Education Best Children’s
Book; Green Earth Book Award winner, Plastic, Ahoy! Investigating the Great Pacific Garbage
Patch; Booklist Editor’s Choice title Ebola: Fears and Facts; and Neema’s Reason to Smile,
winner of a Parents’ Choice Award. Newman hopes to empower kids to think about the adults
they’d like to become. Her author visits are described as “phenomenal,” “passionate,” and
“inspirational.” 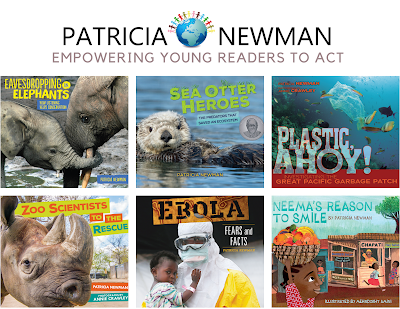 What do you like best about writing nonfiction?
I like to find connections to my world that not only impact me but hopefully will impact my readers. Real-world connections made learning memorable and exciting when I was young (actually they still do). I hope to give my readers that same tingle of awe I felt when I made an important leap that led to understanding.

What do you like least?
Oh, that’s easy—proposal writing. Most short-form nonfiction is written on spec, i.e. the entire manuscript is written and submitted to an editor in the hopes of a sale. However, my middle-grade nonfiction sells via proposal, which is a sales document that outlines the book, the market, the competition, and the experts I plan to interview. Proposals are difficult to write because after only a relatively small amount of research I need to pull together the book’s hook, it’s voice, its narrative thread, and experts willing to work with me—all before the book is actually written. I wrote a guest post for Melissa Stewart’s Celebrate Science blog called Between the Lines: The Nonfiction Proposal that details the proposal writing process, and includes quotes and advice from other celebrated nonfiction authors. If you’re interested in long-form nonfiction, this is a must-read.

Describe a typical writing day.
There’s no such thing. Most people think authors sit alone in their offices all day thinking deep thoughts, and of course, that’s true to some extent, but there’s so much more to being an author. Essentially, we’re each running a one-person business and have to develop a variety of interpersonal, organizational, tech, marketing, and speaking skills, in addition to craft skills.

Some days I write with a laser focus, ignoring email, social media, the phone, and sometimes even my husband! Other days, I dig through scientific studies, locate experts, pour over bibliographies, search the web for articles, and make travel plans for research trips. I’m often on the road visiting schools or presenting at a library, reading, or science conference. Today, I’m responding to interview questions as I wait for my editor to email the latest revisions for my upcoming title. Some days I blog. I curate a LitLinks blog on my website that highlights the natural connections between STEM and language arts, and I assemble middle-grade STEM-themed book lists with nonfiction pal Nancy Castaldo for the STEM Tuesday blog. In between all of that activity, I update my website, write conference proposals, prepare new school visit presentations, design marketing materials, attend critique group meetings, give interviews, and read.

Which of your books was the most fun to write? Why?
All of the books have been fun for various reasons. Sea Otter Heroes involved a research trip to the Elkhorn Slough off Monterey Bay. Any time I’m on the water, I’m happy. My daughter went with me as research assistant/photographer. Several of her photos made it into the book.


While writing Plastic, Ahoy!, I met photographer/filmmaker/diver Annie Crawley. When we worked on Zoo Scientists to the Rescue, we traveled to three different zoos and interviewed/photographed three different scientists. We navigated a Colorado blizzard, laughed over an angry black-footed ferret that scolded us, and gasped when a rhino charged Annie’s camera lens.


During the research phase of Eavesdropping on Elephants, I interviewed Katy Payne who started the Elephant Listening Project with colleague Andrea Turkalo at Cornell University. Katy and her husband also discovered that humpback whales sing to each other, so she was already a legend when I spoke with her. The scientists at ELP were so generous with photos, video, and audio. I returned home with several files and had a wonderful time choosing which sounds would be featured in the book’s QR codes.

When I traveled to the Pacific Northwest to research Planet Ocean, I took a scuba diving class with Annie and her Dive Team.


When you’re reading for pleasure, what features of a book typically impress you the most?
Whether I read nonfiction or fiction, I love books that have a clever hook. I like to be drawn in right away. I also gravitate toward books with different formats. I especially study the formats of nonfiction books.

What brings you joy?
·      Family get-togethers with good food and board games
·      Holding hands with my husband
·      Watching a mother elephant caress her newborn
·      Being outdoors
·      The third-graders who compared my Neema’s Reason to Smile with Plastic, Ahoy! They told me the many differences between these two titles – one’s fiction, the other is nonfiction; one is illustrated, the other has photos, etc. When I asked them what was the same about these two books, one third-grader said, “They both want us to DO something.”
·      The high school student whose college application essay described how Plastic, Ahoy! encouraged her to study marine debris in college.

What inspires you?
Nature – its beauty, diversity, complexity, and resilience. All good lessons for people, don’t you think?

If you could travel anywhere in the world, where would it be and why?
Egypt, because of its long history.

If you could have dinner with any person throughout history who would it be? What would you discuss?
I’d love to chat about climate change with Rachel Carson and Al Gore.

What aspects of being a nonfiction mentor are you most looking forward to?
I’ve had several critiques of my work throughout the years. Some of them were wonderful, but many of them have fallen short in terms of advice that helped me shape a WIP into a saleable manuscript. I look forward to being the person that helps a new writer become an author.

Can you tell us about any upcoming projects?
As I mentioned above, Annie Crawley and I are teaming up again for a middle-grade title called Planet Ocean. This is our heart book. Every breath connects us to our ocean. Yet we often misunderstand and misrepresent this ecosystem that makes life on Earth possible. In this title, we demonstrate our inextricable link to the sea, and how climate change and pollution affect the sustainability of the beating blue heart of our planet. Our decisions in the US affect the Arctic; changes in the Arctic affect Indonesia. We share cultural and economic perspectives from Indonesians, the Inupiat in Alaska north of the Arctic Circle; and the Lummi Nation in the Salish Sea area of Washington. We also feature many child and teen activists making a difference to inspire our readers. 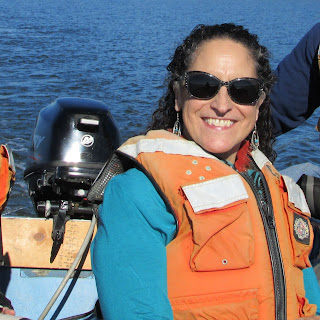 Patricia’s books inspire young readers to seek connections to the real world. Titles such as Planet Ocean; Sea Otter Heroes; Eavesdropping on Elephants; Plastic, Ahoy!; Zoo Scientists to the Rescue; and Neema’s Reason to Smile encourage readers to use their imaginations to solve real-world problems and act on behalf of their communities. A Robert F. Sibert Honor recipient, Patricia’s books have received starred reviews, Green Earth Book Awards, a Parents’ Choice Award; been honored as Junior Library Guild selections; and been included on Bank Street College’s Best Books lists. Patricia frequently speaks at schools and conferences to share how children of any age can affect change. Visit her at www.patriciamnewman.com.


Stay tuned! We'll have an interview with SCBWI-MI's other nonfiction mentor, Stephanie Bearce, next Friday.