Happy fall to one and all!

It’s been a while since our last Hugs and Hurrahs, and you, my Michigan peeps, have been busy! But before we get to all the news, I wanted to announce that this is my last Hugs and Hurrahs post. It’s been a fabulous five years of being your number one cheerleader here on The Mitten! I’ve loved every announcement you’ve sent, and I hope you’ve felt celebrated along the way. I’m so proud to be part of this amazing group of writers, and I hope I’ve helped you be proud of yourselves too! I’m happy to be handing the Hugs and Hurrahs reins over to Sarah LoCascio. I know she’ll do a great job of cheering you on. I’ll include her email at the end of this post.

Now, without further ado, I give you all the happy publishing news from the last few months:

Hats off to the amazing Lisa Wheeler! Lisa sold a book to Dial last October that will be illustrated by Loren Long and is called Someone Has to Build the Dream. It is due out in 2021.

Lisa’s next book, EvenMonsters Go to School, came out on June 9th with Balzer & Bray/HarperCollins. It is illustrated by Chris Van Dusen and is a sequel to Even Monsters Need to Sleep.

Lisa’s award-winning Bubble Gum, BubbleGum (illustrated by Laura Huliska Beith) was re-released from Purple House Press over the summer, and on August 6, the newest Dino-Holiday book was released from CarolRhoda/Lerner called, Dino-Halloween (illustrated by Barry Gott).

Lastly, on Sept. 10, PeopleShare with People, the latest in the "People" series was released with Simon & Schuster (illustrated by the marvelous Molly Idle).

Lisa, you make us all so proud!

Neal Levin is happy to announce that The London Academy of Music and Dramatic Art (LAMDA) published his poem “Baby Ate a Microchip” in their Anthology of Verse and Prose (Volume 19).

So happy for you, Neal!

Congratulations to Dave Stricklen! His new middle-grade novel, RIPLEYROBINSON AND THE WORM CHARMER, released in April from Beachhead Publishing. Ripley’s introduction to his new middle school is with his head held down in a toilet bowl by Dirk, the varsity football star. During his escape, Ripley inadvertently breaks Dirk’s nose and Dirk dedicates his life to retaliation. The only bright spot in Ripley’s life is his wrestling ability…well, that and a cute and kooky girl named Getty. But Getty is obsessed with winning a worm charming contest.

Fun Fact: Worm charming is an actual contest where contestants beat on the ground to see how many worms come up. Dave writes, “My challenge was to wrap a plot so tight around this strange contest that the number of worms coming to the surface becomes the most important thing in the world.”

We’re happy dancing with you, Dave! 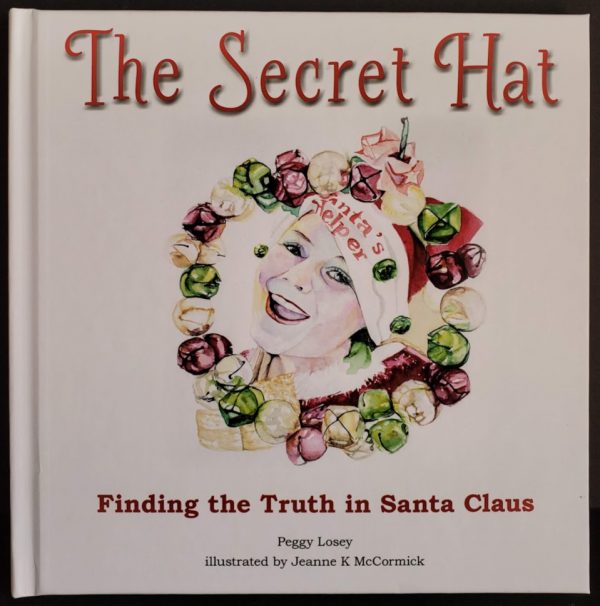 Three cheers to Peggy Losey and Jeanne K. McCormick on the release of their book, THE SECRET HAT. Peggy is the author and Jeanne is the illustrator for this self-published project. 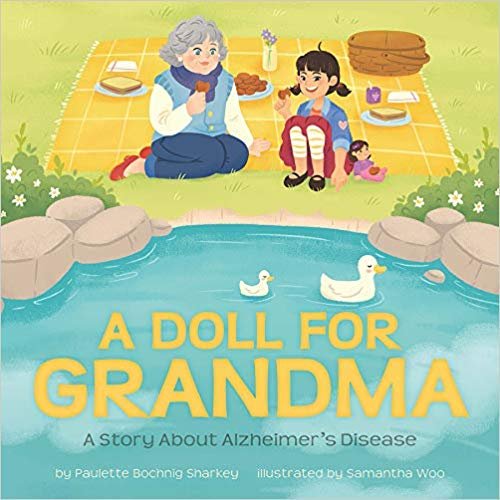 Hats off to Paulette Sharkey! Her debut picture book, A DOLL FOR GRANDMA, will be published by Beaming Books on May 5, 2020. The story is about a girl embracing the changed inner world of her grandmother who has developed Alzheimer's, who figures out a new way for them to play together in this story about empathy, kindness, and the unbreakable bonds of family love. Author proceeds to support Alzheimer's research. (cover attached)

And in June, Paulette was a finalist for Hunger Mountain's 2019 Katherine Paterson Prize for YA and Children's Writing for her story SHIPSHAPE SHELDON, about a fastidious squirrel who buries his acorns so neatly he can't find them later as winter sets in.

We’re celebrating with Jane Stoepker! Jane recently self-published two books as the author and illustrator. You Are Loved and Just Right CupcakeS, are currently being sold at The Bookman in Grand Haven, as well as on Jane’s website.

Happy Dancing with you, Jane!

Congratulations to Lisa Rose! Her most recent book, THE POCKET PICTURE (Ready Readers) was released on August 11! In this book, Jacob feels anxious on his first day of school. But he soon discovers a way to keep his family close even when they are not together.

So proud of you, Lisa!

Angie Kidd celebrated the release of her debut middle-grade light fantasy, The Healing Star, in July. Her official launch party will be on Tuesday October 8 at 7:30pm at Baldwin Public Library in Birmingham.  The book is available on Amazon. For more info, go to https://www.facebook.com/A.Kiddwrites/

Claudia Whitsitt is happy to announce that her fourth book in the Kids Like You Series, BATTLE LINES, is out! The book is about a girl named Hattie who only wants to fit in and leave her tendency for social activism behind. But it’s the middle of 1960’s America when more than one young man was off to Vietnam, including her best friend’s brother who is now MIA.

So proud of you, Claudia! 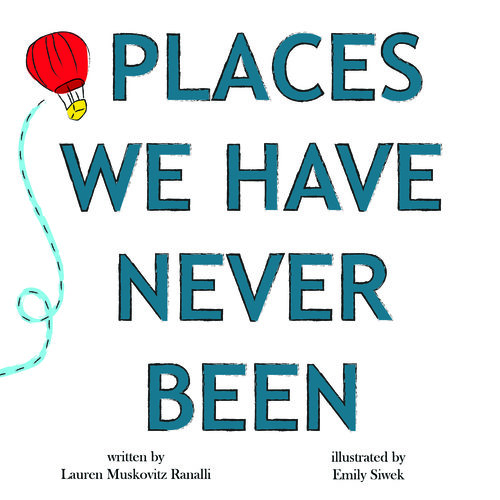 We’re happy dancing with Lauren Ranalli! Lauren’s new book, PLACES WE HAVE NEVER BEEN, illustrated by Emily Siwek, is now available for pre-order at www.laurenranalli.com! What questions can you ask to learn about places you have been? Let's go on an adventure together!

Sandy Carlson is thrilled to announce her latest book, TIME SISTERS: EXCERPTS FROM THE DOMER JOURNALS, released on August 28 with Amazon.uk. Published as both an ebook and in print the book is YA SciFi.
Way to go, Sandy!

I’d like to offer special congratulations to Elizabeth McBride! Her first book, MOST BEAUTIFUL, is inspired by the Village of Glen Arbor and Sleeping Bear Dunes. Although not specifically a children’s book, parents and their children can appreciate the beauty of one of our state’s treasures, voted the “Most Beautiful Place in America,” through Elizabeth’s poetry and prose!

And finally, a project that I’m very proud to be part of, THANKU: POEMS OF GRATITUDE (Millbrook Press), Edited by Miranda Paul and Illustrated by Marlena Myles, released on September 3! It’s a beautiful book by a group of diverse authors, and part of the proceeds of each sale goes to support #weneeddiversebooks.

Well, that’s it for me. What a fantastic way to celebrate my last post! For the next Hugs and Hurrahs send all of your happy publishing news to Sarah LoCascio at sarah.prusoff.locascio@gmail.com.

Congratulations to Lisa Rose on the release of her new book,  THE POCKET PICTURE! 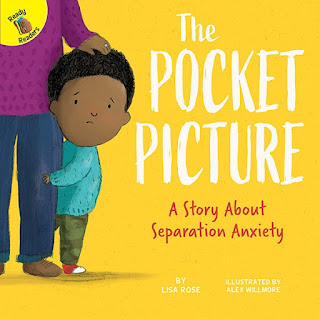 Q#1: Congratulations on the release of The Pocket Picture! What inspired this story?


This was a work for hire story.  I had strict guidelines, so my ideas had to have boundaries.  This isn’t always fun.  I treat it as a puzzle.  How can I say what I want to say in the borders given to me by my editor?

Q#2: You’ve written both chapter books and picture books. How do those experiences compare? Do you have a different process for each?

I was first a playwright.  So, when I write, I usually picture it on the stage in my head.  In picture books, each page is a scene change.  This helps the pictures tell the story as well as the words.  If the scenery just stays the same, you have a very boring book.  In longer books, you have to make sure you don’t have just “talking heads” on your stage.  “Talking heads” are boring!

Q#3: The Pocket Picture has been published with an educational publisher, like your previous books in the Star Powers series, which also have nonfiction backmatter. What do you enjoy about including educational and nonfiction elements in your books and stories?

I’m a teacher it’s a professional hazard.  Seriously, Rourke Educational Media sells directly to the school and library marketplace.  My buyers are teachers and librarians.  As a teacher, I know how tight money can be.  I want to create a book that can be used multiple times in different lessons.  It is important to me that my readers feel it was helpful in multiple ways.

Q#4: Many of your books include themes of inclusivity and acceptance. Do you have any overarching goals or inspirations that guide your stories?

I never write a story with a “goal” or “moral lesson” in mind.  However, I’ve been a life-long fan of the underdog.  Personally, “the underdog” and me always had a lot in common.  : )   However, my daughter is legally blind and uses a cane.  As a teacher, I always talked about “diversity” and believed I had an inclusive literacy in my classroom.  However, when I went to find books that depicted my child, I found very little.  Or when I did find a book, the book was “Rudolph-The-Red-Nosed Reindeer” themed.  I realized the books I used in the classroom were similar. I just wanted a story about a girl doing kid things---just this girl used a cane and wore dark glasses.  So, I wrote them!

Q#5: What are your marketing plans for The Pocket Picture? How can people connect with you?

Because this book was a work for hire, I do very little promotion in compared to my trade books.  However, I will sell this book at other author events.  I have three upcoming picture books that I will work hard to promote. 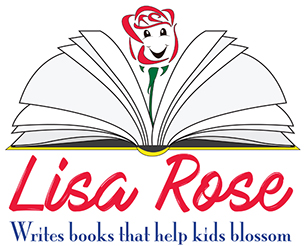 A little bit about the book: Jacob feels sad and anxious on his first day of school. He wants to be with his family! But he discovers there's a way to keep family members close, even when they're apart. In this book, beginning readers in prekindergarten to grade 1 can join Jacob as he shows a classmate how to make his own pocket picture—and makes a new friend!

A little bit about the author: My chapter book series Star Powers is published by Rourke Educational Media. My first picture book Shmulik Paints the Town (Kar-Ben Publishing 2016) was a PJ Library Selection in May 2016. It was sent to over 26,000 homes in North America. It will again be released to over 26,000 homes in 2020.  My short stories have been published on an app called Amazon Rapids designed for at risk readers.  I have three upcoming picture books. I founded the Missing Voice Picture Book Discussion Group, whose mission is to highlight new picture books featuring diversity and little-known subjects on a monthly basis. 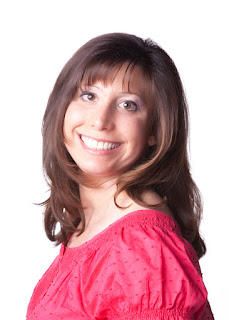