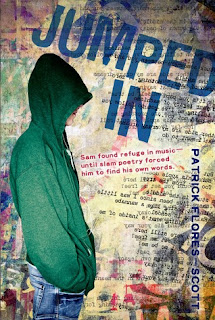 My first novel, JUMPED IN, was published in 2013. I had begun writing it in 2005. The most difficult part of the eight years was the stretch where I was waiting for rejection letters from editors.

The best thing an artist can do to deal with rejection and waiting (and success too), is to make more art. So I tried to get going on my next book. But as months turned into years and the process dragged on and the rejection letters stacked up, waiting and rejection combined into a toxic tornado of stress that got in the way of my art-making.

I needed help to get through the waiting—a little something to inflate my sagging confidence and give me some faith in the idea that I belonged in the world of legit writers.

Somewhere along the line, I re-read my rejection letters. In many of these letters, editors took time to point out something worthy about my manuscript. These comments turned out to be freaking gems that I had allowed to get lost in the mountainous rock pile of rejection.

On a silly whim, I decided to cut-and-paste these gems and compile them into a single letter that would add up to an amazing praise-fest of Jumped In. Then I allowed myself to imagine the letter was sent to my agent from one classy editor named Carol Lombardozzi-O’Callaghan. Carol worked in a Manhattan high rise for the teen imprint of a MAJOR publisher. Carol was a real pro. No patience for shoddy work. And she knew a good thing when she saw it. Carol loved my book. Loved it. She loved the exact same stuff about Jumped In as the editors who had rejected it. Only Carol never typed the words but or however or I’m sorry to say in her letter. 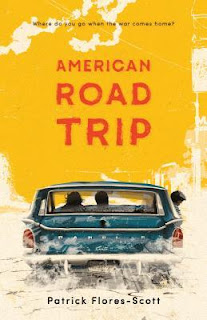 Carol’s letter gave me a boost, and I did get to work on my next project. But in the end, what that letter really helped me to see was that I shouldn’t have needed it. I realized that the positive comments those editors wrote in their rejections sounded a lot like comments beta readers had told me about my manuscript years before. They sounded like stuff I had once believed about my manuscript and my writing.

There might be some folks in your life who will tell you your writing is great just to avoid discussing the very real parts of your writing that are not so great. However, most beta readers who give you positive feedback and compliments mean what they’re saying. Listen to that awesomeness. Positive notes are a legitimate part of critical feedback—as legitimate as the negative stuff we find so easy to accept and hold onto.

Use the not-so-positive constructive criticism to improve your manuscript. Then make note of the compliments. Collect those gems. List them. Put them on a poster. Write them into a letter from Carol Lombardozzi-O’Callaghan, if you need to. Use the gems to create a well of positivity to help steel yourself for the waiting that is to come. More importantly, use the well of positivity as inspiration and get moving on that new project. That thing is worth it. And so is all the time and energy you will spend to make it great.

Thanks so much for sending Jumped In. I read it this weekend, and I thought that much of it was pretty great. Great concept, good writing.

I have to say, Sam is a relatable, misunderstood protagonist with a very lot of heart, and I was especially impressed by the construction of this novel. I love the idea of the loners/slackers being redeemed through poetry, of course. And I found the story extremely moving.

I cried when Luis died, and I was blown away by his poems.  The humor was terrific too.  I loved Sam’s assessment of Julisa on page 203 (As smart as my friend Julisa Mendez may seem, she has some serious holes in her vocabulary. Somehow she never learned words like, “never,” or “no,” or “I can’t.”). I love the moment when Sam decides to teach the parrot to say, “Hello, Sam.” I loved the scene when he throws his mother’s letter away. And I loved the way this text plays with stereotypes and gives us a view into Luis’s mind that makes life itself—each tiny little moment and detail—seem precious and beautiful.

I agree that Patrick Flores-Scott has an exciting new voice, and I was certainly glad to read this. I do think this has a great deal of merit. Thanks so much for thinking of me. 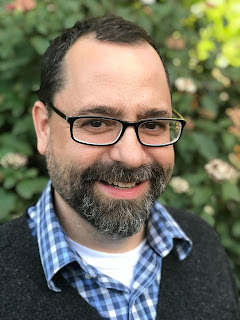 Patrick Flores-Scott is a former public school teacher and current stay-at-home dad and early morning writer in Ann Arbor, Michigan. Patrick’s goal for his first novel, JUMPED IN, was to write a story that would engage struggling readers. JUMPED IN has been named to the 2014 YALSA Best Fiction for Young Adults list, a Walden Award finalist, a Washington Book Award winner, an NCSS/CBC Notable Book for the Social Studies, and a Bank Street College Best Books of 2014. Look for his second book, AMERICAN ROAD TRIP (Christy Ottaviano Books/Henry Holt Books for Young Readers) in bookstores now.


Coming up on the Mitten Blog: A new fall blog banner created by our new Featured Illustrator and another round of Hugs and Hurrahs! Please send your good news about writing, illustrating, or publishing to Patti Richards by October 8th to be included. Plus, Writer Spotlights, Book Birthdays, and a new ongoing feature: Tips for Painless Self-Promotion.

See you next Friday!

Thank you Brianne for designing our new banner! Brianne Farley is a picture book writer and illustrator.