Where we celebrate new books from Michigan's authors and illustrators.

Congratulations to Lindsay Moore on the release

of Yoshi and the Ocean: A Sea Turtle's Incredible Journey Home 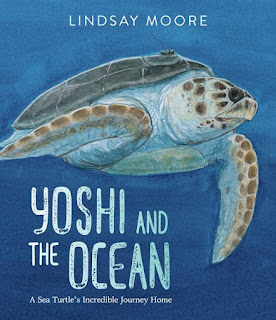 What is something you hope your readers will take away from your book?

I think the underlying purpose behind what I write and illustrate is a desire to share the wonder I feel about the world we inhabit.  So, as I work, I am trying to translate that wonder for my audience in images and text. Where that takes a reader depends on the individual, but I hope some are inspired to create, pursue more knowledge or for others to take action.

You mention in the Booklist  video that you treated the ocean as a character while creating the story. What was your process?

Yes, I wanted to treat the ocean as more of a character than a setting because Yoshi and the Ocean is not just about a sea turtle, but also about how the ocean works. The ocean is dynamic.  I chose a color scheme to represent different ecosystems in the ocean as Yoshi, the main character, moves across the globe. I also used a wet-on-wet technique to mix colors as I put down layers of watercolor to keep the ocean from looking too flat.  Sometimes there was too much noise and my art director and editor had me ratchet it back.  I looked at a lot of paintings by Winslow Homer for Yoshi and the Ocean.

The back matter includes incredible detailed illustrations. How long did it take to conduct the research for the book and complete the illustrations?

I worked for about a year on Yoshi and the Ocean.  When my editor suggested this story and we had both fallen in love with the real-life Yoshi, I had to quickly learn a lot about sea turtles. I could maybe guess a few sea turtle species names, but I wouldn’t be able to tell them apart. When I was reading text, I kept getting Leatherback and Loggerhead turtles confused because of the L’s.  Of course, in real life they look very different, but I’m just being honest about my starting point.  I was new to marine herpetology.  My information came from books, peer-reviewed research journals, a necropsy guide, webinars and interviews with scientists.  I spoke with someone who cared for Yoshi, and sea turtle researchers in Australia and the States. I even emailed a sea turtle anatomist who helped me with choosing the right color for sea turtle lungs. I have a fear about perpetuating myths or old information, so I try to dive really deep into primary research and pay close attention to when the articles were published.  Then, before publication, content specialists and a copy editor comb the text and illustrations for errors as well.

What was the most difficult part of writing this book?

It’s a toss-up.  Cutting stuff from it was hard.  Yoshi swam for 2 years and visited a lot of amazing places, but we had to cut some of them to make the story fit into the picture book format.   For example, Yoshi spends a bit of time in Walvis Bay, Namibia and anyone reading this should stop what they’re doing and google it.  It is this amazing marine and coastal area with dolphins and flamingos and cape seals and whales, and we just couldn’t fit it in. If I could have written more about the whole Skeleton Coast, I would have.  All the research opened my eyes to an area of the world I knew so little about.  I would like to visit Namibia and South Africa one day.

The other challenge was finding the story’s voice. It always takes me a long time to get the sound and rhythm right.  I usually wrestle with that the most in a manuscript. Walking in the woods, running or swimming laps helps me with rhythm.  Also, reading good writing helps.  Edna St. Vincent Millay, Wendell Berry, William Blake and Gabriel Garcia Marquez are all voices I love to read and help with my internal voice. 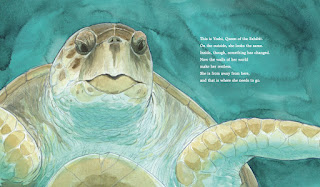 What's next for you?

Between the art and the writing, I feel like picture books take a toll on my mind and body. So, I took a break and I have been reading a lot about a few different topics that fascinate me.  I can see some ideas forming the skeletons of stories in my notebooks. There is so much wonder in the world and there are so many stories waiting for a chance to be told.  It really just takes the artist listening long enough and taking the time to cultivate what’s there to find the right narrative. In all honesty, I’m writing this as a gentle reminder to myself.

In 1997, a young loggerhead sea turtle was rescued from the ocean after an injury to her shell. The fishermen who rescued her named her Yoshi and took her to the Two Oceans Aquarium in Cape Town, South Africa. She was rehabilitated there and grew stronger—and larger!—every day. She also became one of the most popular exhibits at the aquarium. After twenty years in captivity, Yoshi was released back into the ocean and traveled more than 25,000 miles in 1,003 days to find her way home. A tracking device on her shell transmitted data about her journey to marine biologists and turtle enthusiasts of all ages around the world.

Lindsay Moore is an artist and writer with roots in Northern Michigan.  She studied marine biology and fine art at Southampton College on Long Island and figure drawing at the Art Students League of New York, and earned her master of science in medical and scientific illustration from Medical College of Georgia, now Augusta University.  She is the author and illustrator of Sea Bear: A Journey for Survival and Yoshi and the Ocean: A Sea Turtle's Incredible Journey Home.  She also created the artwork for Rosanne Parry's middle grade novel, A Whale of the Wild. After living in many lovely cities around the Great Lakes and across the globe, Lindsay works and lives with her family in the beautiful and often wintry woods of Northern Michigan.