Happy summer everyone! It’s time for another edition of Hugs and Hurrahs, and as usual, our Michkidlets have lots to cheer about. So put down that sunscreen and let’s get this party started!


Claudia Whitsitt has a lot to celebrate! In March 2016 her middle grade historical fiction novel, Between the Lines, received an Honorable Mention in the 21st Annual Writers Digest Self-Published Awards in the Middle Grade/Young Adult category. Following this award, Between the Lines, then received the Silver Medal in the 2016 IPPY awards for Middle Grade Multicultural Fiction Juv/YA. Claudia attended the awards ceremony at the Willis Tower in Chicago on May 10th. We’re happy dancing with you Claudia!

Kathy Higgs-Coulthard is super excited about her debut middle grade novel, HANGING WITH MY PEEPS. Her book was released in April through CleanReads and is available in print and e-book formats through Amazon and Barnes and Noble. So happy for you Kathy!

Neal Levin is excited to announce that The Poetry Foundation has renewed its lease of his poem "Baby Ate a Microchip" for another 10 years, and reprint rights were also purchased by Oxford University Press-India.


In more good news, Neal’s short story "The True Meaning of Hannah Berger" won an Honorable Mention in the 84th Annual Writer's Digest Writing Competition. In addition, his poem "Wam Welcome" was published in the March 2016 issue of Highlights. So excited for you Neal!

Laura Wolfe is thrilled that her YA mystery, Trail of Secrets (Fire and Ice YA, 2015), was recently named as a Finalist in the 2016 Next Generation Indie Book Awards in the First Novel (under 80,000 words) category. Also, Laura’s long-awaited picture book, Henrietta's Hoof Polish, (illustrated by Eugene Ruble) was also recently released by Guardian Angel Publishing. Congratulations Laura!

A standing ovation goes to Monica Harris for selling 3 pieces to the Data RecognitionCorp-Nebraska and 3 additional pieces to DRC-Wisconsin. That’s awesome Monica!

To learn more about the Sustainable Arts Foundation, visit http://www.sustainableartsfoundation.org/ 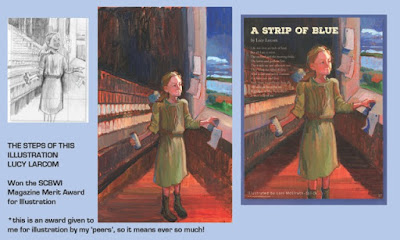 Lori McElrath-Eslick is the proud recipient of the SCBWI Magazine Merit Award forher illustration that accompanied the poem, “A Strip of Blue,” by Lucy Larcom. The story and illustration appeared in Cricket Magazine. Way to go Lori!

Our fearless Mitten editor, Kristin Lenz, has something to celebrate! Kristin’s forthcoming YA novel, The Art of Holding On and Letting Go, was chosen as a Junior Library Guild Fall 2016 Selection. So proud of you Kristin!

We’re giving a big round of applause to Alison DeCamp since her first middle grade
book, set in the UP in 1895, MY NEAR-DEATH ADVENTURES (99% True) was named as a Michigan Notable book for this year and was on the shortlist for the New-York Historical Society Children’s History Book Prize. The second book in the series, MY NEAR-DEATH ADVENTURES: I Almost Died. Again. releases on July 5th. Alison will be having a release party in the Harbor Springs area on that date at Between the Covers bookstore. All are welcome, but space is limited. Contact the store at 231-526-6658 to sign up. Way to go Alison!

Hats off to MattFaulkner! Matt illustrated the picture book, ELIZABETH STARTED ALL THE TROUBLE by Doreen Rappaport, which is now is a nominee on the ALA Summer Notable books list. So happy for you Matt!

Deborah Marcero has lots to celebrate! Her debut picture book, Ursa’s Light released April 15, 2016 with Peter Pauper Press and received a starred review from ALA Booklist. Deborah’s second book in the Backyard Witch series, Jess’s Story, will release with Greenwillow, Harper Collins on July 12, 2016. Deborah is the illustrator and the series is co-written by Christine Hepperman and Ron Koertge. And last but not least, Deborah sold the picture book, ROSIE AND CRAYON to Mara Conlon at Peter Pauper Press. The deal was announced on May 5th, 2016; the book is set to release in Spring 2017. You make us proud Deborah!

Shhh! Lisa Rose has sold two stories, WORM VS. EARLY BIRD, and THE VENUS FLYTRAP AND THE BEE to Amazon. Shhh! Lisa is involved in a super secret app which will launch later this summer. Shhh! More details coming soon.

KirbiFagan is currently working on a unique project with the writer of Fight Club & Dark Horse that has just been announced! "Bait" is a collection of short stories by Chuck Palah​niuk, which is illustrated with colorable illustrations. Kirbi and 8 other illustrators are included. ​

Kirbi also just signed with Plum Pudding Illustration Agency for UK exclusive representation, and her work was chosen to be​ featured at the Society ofIllustrators in NYC this month. The show is called "Point of Vision-Celebrating Women Artists in Fantasy and Science Fiction," ​was curated by some of the top art directors currently working in science fiction/fantasy and will be there until August. Such fabulous news Kirbi!

And one more bit of good news from me (Patti Richards:)! I recently signed a contract with Red Line Editorial for a book in their upcoming series on technology for kids. My title is, ALL ABOUT SOCIAL NETWORKING, and the series is scheduled for a spring 2017 release. You many now commence happy dancing with me!

Well, that’s all for this issue, and isn’t that quite a list? We have so much to be proud of here in our great big Mitten. Congratulations everyone!


Send all of your happy publishing news to Patti Richards at pgwrites5@gmail.com. ​

Email ThisBlogThis!Share to TwitterShare to FacebookShare to Pinterest
Labels: Hugs and Hurrahs

Thank you, Melanie Bryce for illustrating our new banner! Melanie has been a non-PAL writer and illustrator member of SCBWI since 2018 and became a KAST (Kalamazoo Area Shop Talk) member in 2019. She studied creative writing, watercolor, and life drawing at the Kalamazoo Institute of Arts and Kalamazoo Valley Community College. Melanie is involved in the Kalamazoo arts community, including providing illustrations for KAST’s recent event “Kast a Spell,” participating in Art Hop, gaining acceptance in the West Michigan Area Show with her “To the Moon” submission, gaining acceptance in the 2018 KVCC student art show, and winning first place in the 2016 KVCC New Media Showcase.